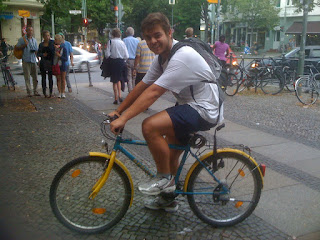 Among more of the unusual requests, I've been receiving since the founding of this project, have been questions about Life, the Universe and Everything. Today, was not an exception. It was Sunday and no bikeshops were open and G. another CouchSurfer from Spain had a puncture in his wheel. Not being able to live even a day without his trusty steed (I know the feeling), he contacted me, pleading advise for his situation. Promptly, I dug out my Bicycle Repair Man costume (see Monty Python sketch of same name, if this reference is lost on you), and zoomed to Schlesi, where I found a a forlorn G. with his lame bicycle. I had brought spare tubes for 26" and 28" wheels, but his bike has 24" wheels! After my laughter had abated enough to fix his tube, we quatsched a bit, while onlookers admired my puncture repair skillz;-) He told me that rather than buy a stolen bike from the flea-markets in Berlin and promote the bike theft circle, he would buy a child's bike, though it be more uncomfortable and ridiculous looking! A guy with bicycle ethics, super-fantastisch! Within approx 20 minutes, G. was on the road again, with the grin you see in the photo. I had to take a photo to remind me of his "clown-style" miniature bike. Ride on, you crazy diamond.
By Unknown at August 06, 2012